Turkey bacon is often praised as a healthier alternative to traditional pork bacon. This article reviews the nutritional profile of turkey bacon, determining whether it’s truly a healthier choice.

Turkey bacon is often praised as a healthier alternative to traditional pork bacon.

It’s made by shaping a seasoned mixture of finely chopped turkey into strips that resemble traditional bacon.

Though it contains less fat and fewer calories, turkey bacon is still highly processed and may contain ingredients that can be bad for your health.

Some manufacturers even use stripes of light and dark meat to mimic the look of traditional bacon pieces.

You can cook it the same way as traditional bacon. It’s typically pan-fried, microwaved or baked in the oven until golden and crispy. 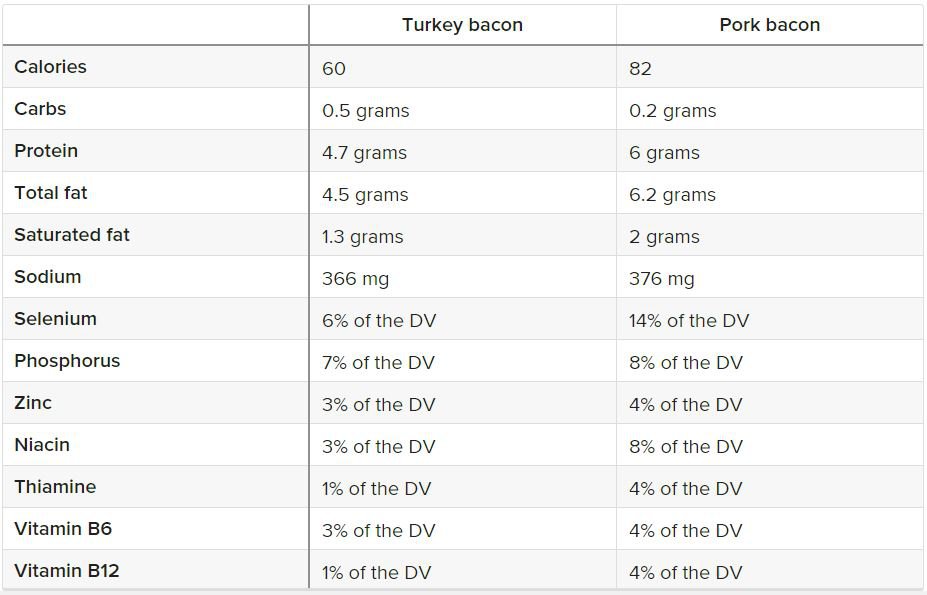 Turkey bacon is a leaner alternative to traditional bacon. However, most varieties contain added sugar and chemical preservatives — unless indicated otherwise.

Turkey bacon is lower in calories and fat than regular bacon and a good substitute for people who don’t eat pork.

Turkey bacon is lower in protein and often higher in sugar than pork bacon. Since it’s a processed meat rich in sodium and preservatives, you should eat it in moderation.

The Bottom Line
Turkey bacon has slightly fewer calories and fat than pork bacon and can be a healthier option for people on special diets or who can’t eat pork.

Yet, it’s a processed meat with less protein and more added sugar than regular bacon and may contain preservatives that have been linked to increased cancer risk.

Though you can find more natural options, it’s still best to enjoy turkey bacon in moderation.

Thank you for subscribing!

You will receive important news and updates from our practice directly to your inbox.